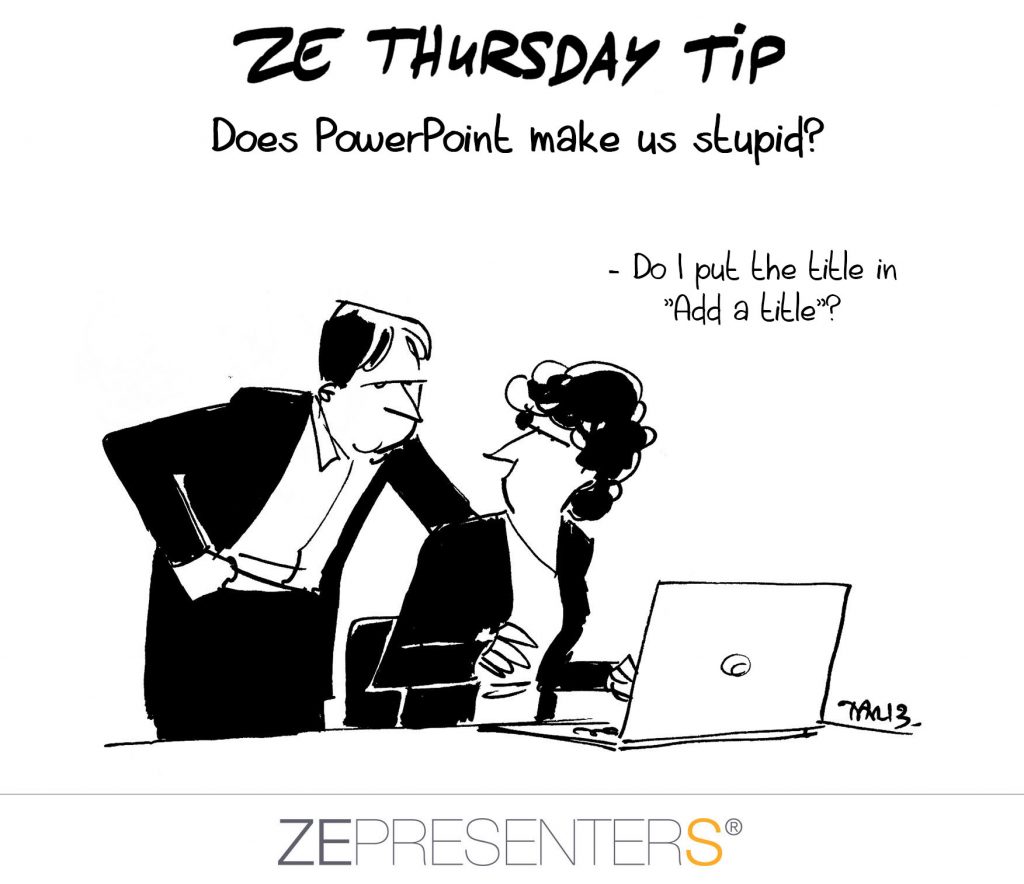 Presentations multiplied in the 80s, when we moved from a system with a single decision maker – the manager, the director – to an organization where several people had to agree in order to move forward – the management committee, the task force, the commission…35 years later, PowerPoint has become indispensible and nearly 500 million users worldwide design presentations that a majority of us have to endure without remembering their source or their necessity.

More and more articles and books are nonetheless critical of PowerPoint and how the software requires us to think. Some even go as far as to say that it makes us stupid! However, behind these positions and hype, some arguments are worth taking into account.

First, a presentation is at the service of an idea, not its speaker. Those who consider the exercise of presenting as an exam where they will be judged are just as wrong as those who turn it into a platform of their expertise. These presentations make us stupid because they deceive us as to their real intention and place the issue on a personal level when it should be placed on conveying ideas. The end of a good presentation should not be commented with “bravo, you were great!” but rather “thank you, this will be very useful to me.”

Boring presentations also contribute to this “stupidity” because they spoil the attention the audience is willing to pay to the speaker. As we know, “being informed” is not enough to satisfy audience expectations. It is the responsibility of the speaker to capture and maintain attention to ensure that the audience understands and retains the information. It is also his responsibility to give meaning to the idea he is proposing in order to stimulate the decision-making process and strengthen the commitment made. The role of a presentation is not just to present an idea but also and more importantly to further its assimilation by the audience.

The final danger of a presentation concerns the passivity of the audience. And the term “danger” is not too strong in this case when we know that NASA officially blamed PowerPoint in the explosion of the shuttle Columbia in 2003. The inquiry showed that the mistake at the source of the accident could have been discerned in the presentation given by one of the engineers, but the audience, turned into spectators, didn’t have the presence of mind to question an embellished point that was made to convince. Of all the arguments against PowerPoint, it is certainly the most relevant. But again, it rests on a misunderstanding of the tool itself. A presentation is not a show requiring absolute silence from the audience. On the contrary, a successful presentation lies precisely in the interaction, involvement and questioning it is able to stimulate. It is the joint responsibility of the speaker and the audience to reinvest in a forum of exchange and discussion.

This “stupidity” trial has the merit of raising the debate and giving new meaning to actions that have become too daily. For that which makes us stupid is forgetting why we do things and continuing to reproduce only bad practices because “it was done that way before” or because “that’s what was asked of me.” And you, why do you present?

Storydesign
← Trends in slide designWhat to do when you don’t believe? →