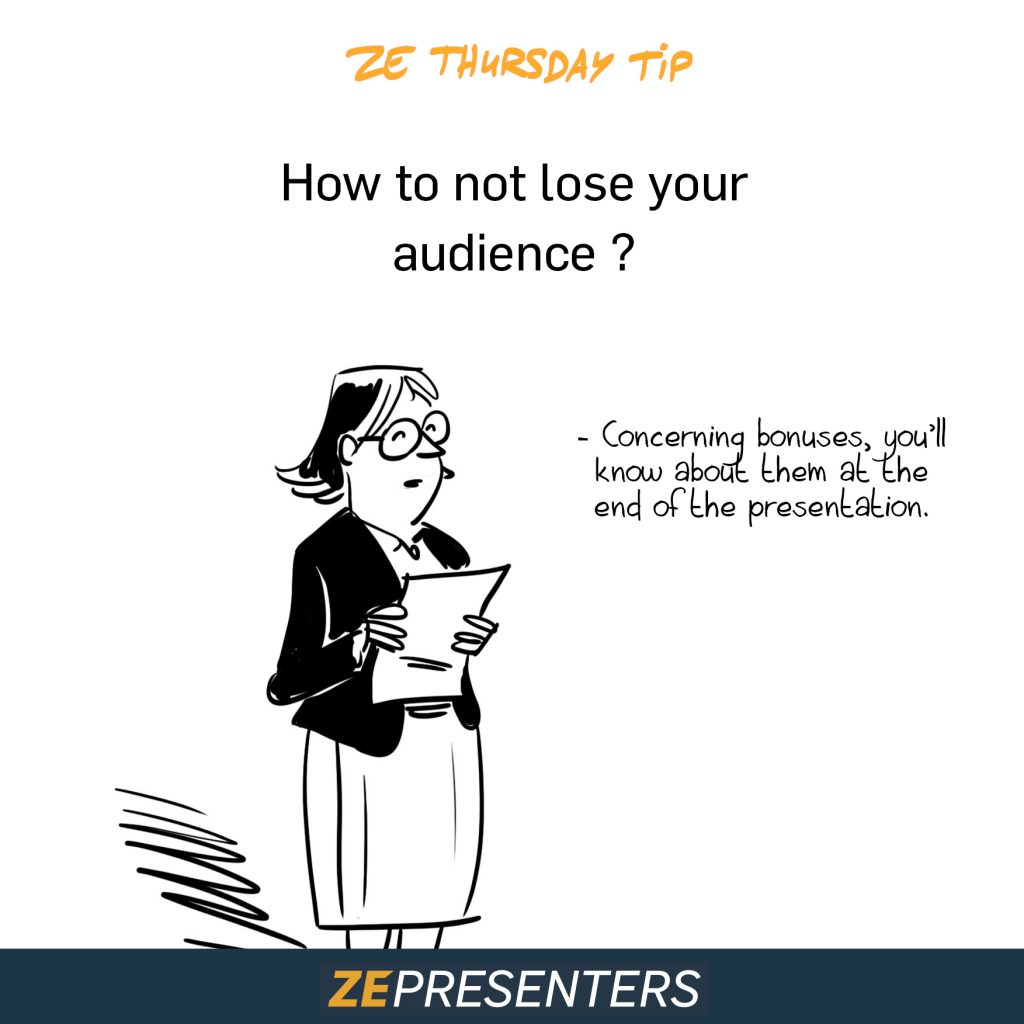 You’ve probably read a lot of advice, including ours, to keep your audience focused for the duration of your presentation. You might have read “how to structure your remarks,” or “how to capture attention,” among others. One thing is certain, you are often shown what needs to be done, but sometimes it is important to know the pitfalls to avoid to not lose your audience. Here are 3 tips for not killing your own presentation.

When we present, we tend to want to show everything in order to be exhaustive. But throwing out all this information is like throwing several juggling balls at someone. He or she will be able to catch one, maybe two, but surely not all the balls. The same goes for your slides. The members of your audience will grasp some information, the slides that interest them the most, before quickly tuning out of your story.

To avoid losing your audience, be attentive to your slides and your transitions

Do not put everything on your slides, only key information is necessary. Once you have defined the key information you want to share, don’t show it all at once, think of dispersing it little by little throughout your speech. Like with a story, work on your transitions, one idea after the other. By throwing one ball, then a 2nd, then a 3rd, you hold the reins of your presentation by keeping your audience captivated, waiting to know what comes next.

Stop with the summaries

But (for the audience) to learn what comes next, you cannot have already said everything from the beginning. In this regard, one of the most common pitfalls is the use of summaries. A summary has its place in a presentation that is sent out, not on slides that are intended to accompany the speaker’s remarks. It’s as if you’re going to see a movie and you’re told before it starts: “So briefly, at first you’ll see a family, then the girl gets kidnapped, and in the end, we find her safe and sound. Now, I’ll tell you the story.” No need to, we already know it!

First tip, avoid jumping in time: “As I told you earlier…,” or worse, “as you’ll see in the next part…” A story is a chain of cause and effect links. Jumping backwards or forwards just adds to the confusion. Another important point: do not talk about the end at the beginning; otherwise, your audience will have no interest in listening to you. According to Andrew Stanton, you know that you’re telling a story when the audience agrees to listen to you without knowing where you’re going. That is storytelling. If this situation occurs, it means you’re telling a story. Because telling a story is bringing the audience into a dynamic where even if it doesn’t know what will happen, it is listening to you.

Many people drag down their presentation as soon as they connect. They want to start with an anecdote but they can’t help but add layers of useless information before starting. “Before telling you an anecdote, as you know, I will present last year’s results…” You are polluting yourself by breaking up the rhythm of your story and talking about what you’re going to do, instead of doing it.

To avoid losing your audience, don’t pollute your own speech

Don’t try to set the stage by saying that you’re going to tell a joke. Be sure to start directly with a question or story that will immediately engage your audience. Finally, avoid, at all costs, reducing what you say to: “A little anecdote…,” “We tried to…,” “We hope that…”  You may think you’re being humble, but the audience will simply doubt your ability to handle the project. Assert yourself and don’t be afraid to take positions on issues, be proud of the project you’re running.

This said, we hope you have enjoyed reading this brief, humble ZE TIP 🙂

Storytelling
← 3 questions to structure your presentations!How to turn my figures into a story? →