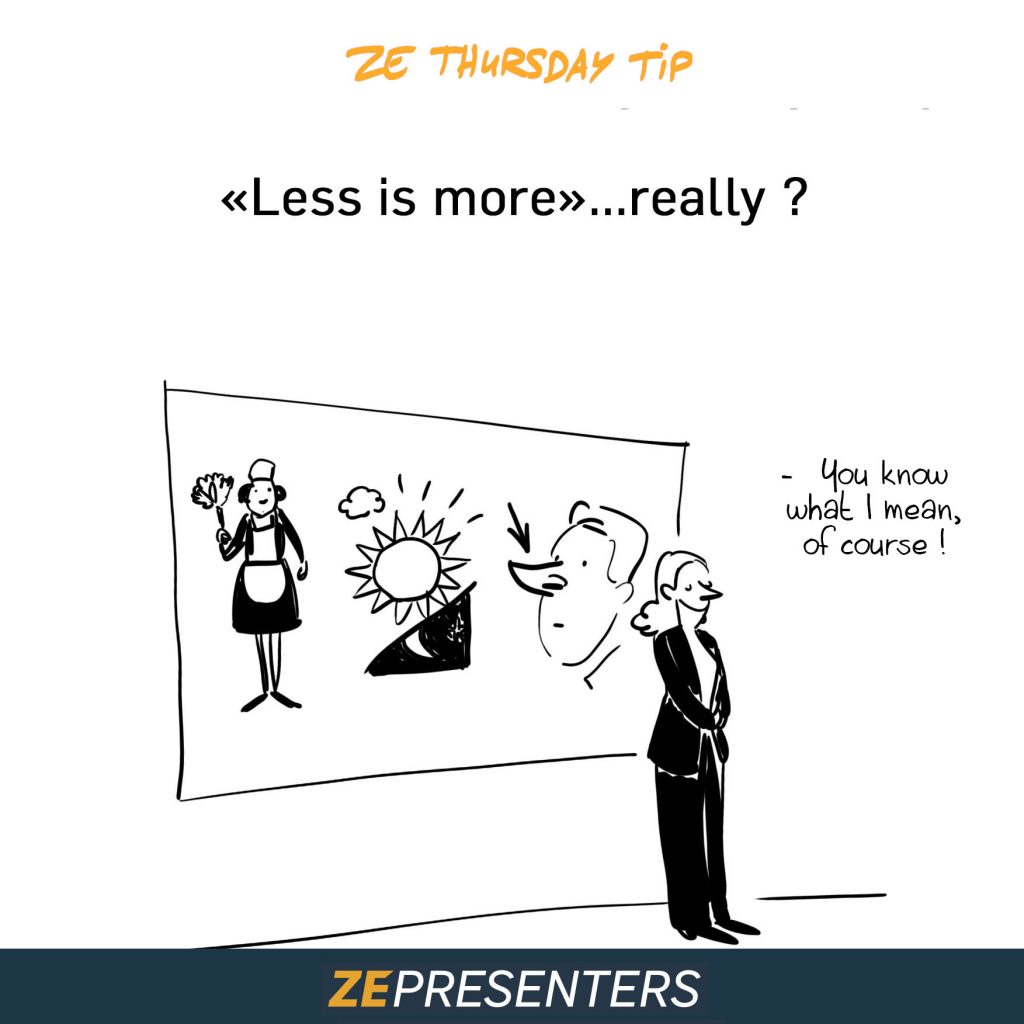 For years, we have seen slides in companies that are overloaded with texts, numbers, graphs and images. With such slides, speakers lend themselves to the boring exercise of commentator and the audience reads rather than listens. In short, no one wins and presenting becomes almost outdated.

Faced with an obstacle, we generally have two types of reactions: either we continue to do as we have always done, because we don’t know how to do otherwise, or, we decide to do the opposite of what has always been done.And, it is by following this logic that the minimalist trend in slide design has appeared; the figurehead being Steve Jobs and his keynote talks at Apple. The trend calls for streamlined slides, discreet text and impactful large-format images. Simple but effective, the “less is more” motto!

And it is by pushing the “less is more” principle to the extreme that we end up with slides consisting of a single image without any text. For if slides without text are technically possible, they are only recommended under certain conditions.

We are left with two opposing practices but equally counterproductive:

If you identify with these two cases in your presentations, your slides hurt you more than they help you. For this is the real mission of your slides: to accompany you in your presentation in order to make a strong impact on your audience. You and your slides must form a complementary duo: you put across your idea and your slides amplify it. The role of slides is to anchor your message in the most impactful way, by appealing to the senses (visuals, images, powerful words) to stimulate memorization.

If your slides are naturally overloaded, you would be wise to read or reread this previous tip.
If, on the contrary, you are inclined to maximum purging, here is how to do it:

The image to amplify the idea

In this first case, the image has a super power: it is thought that we retain a message 7 times more if it is associated with an image. Yes, visuals are powerful.

Especially since it has been shown that a message appears more credible when associated with an image! But to fully benefit from this effect, you will have to associate the text, a short hook that formulates your idea, with an image to amplify it.

If, for example, you want to illustrate the digital revolution by an image of a big wave flooding companies and taking away those who weren’t prepared; without hesitation, display a wave, anchored with the following text: “digital transformation; prepare for it or drown!” Here, the picture’s mission is to amplify your message by imaging your idea or spinning an analogy. And, don’t forget your text to anchor your idea, otherwise your image can give rise to several interpretations.

The image is the idea

The strength of some visuals is also the emotion they transmit. Some visuals are self-sufficient and carry a strong idea that would be almost polluted by a comment. In this case the idea is totally conveyed by the image. For example, if you are talking about your last humanitarian trip to Kenya, a concrete picture of your adventures is clearly enough in and of itself. The rule “less is more” takes on its full meaning in this context where the idea can be expressed in its entirety through an image. Therefore, if your image is strong, rather than describing it, show it!

So, you get it, less is more but sparingly. When designing your visual aids, it’s up to you to imagine the most impactful slide, whether it be accompanied by an image, a text… or not!

Storydesign
← HELP EVERYONE IS BOREDHelp, I don’t know how to tell stories! →