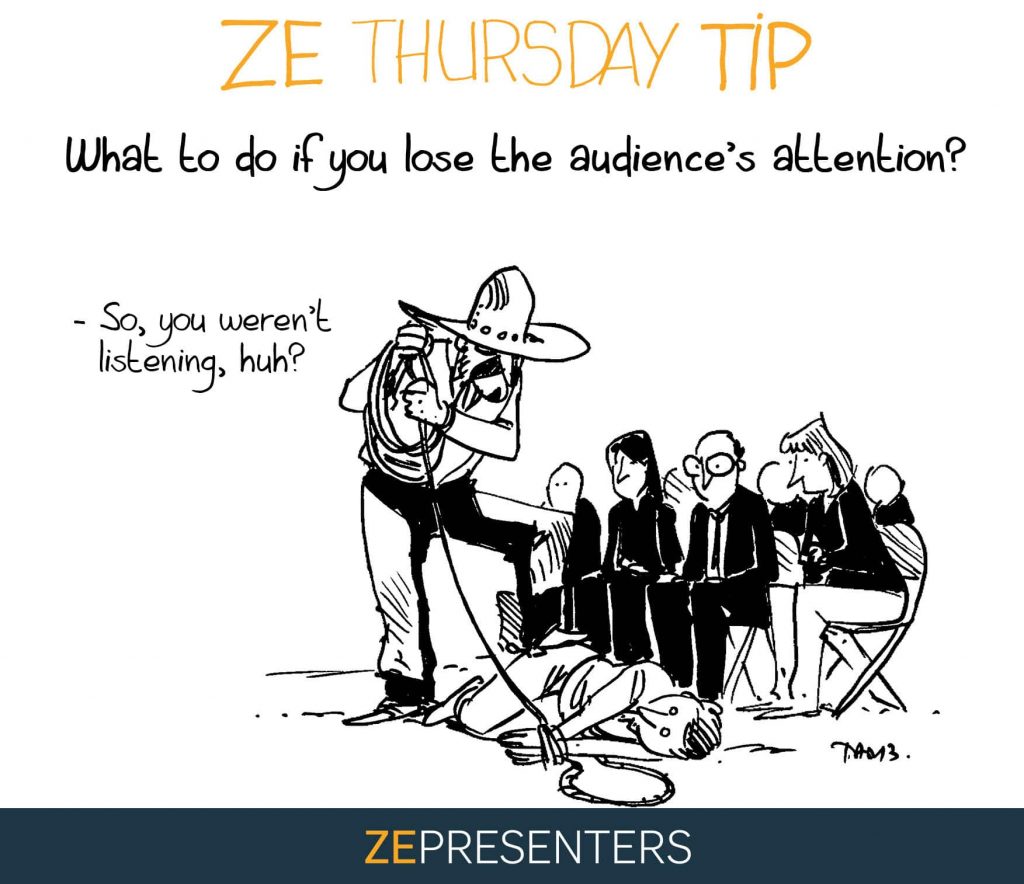 When we’re within a few short days of an important presentation, many of us are agonizing over what will happen. It is often a negative scenario and the audience has the worst role. We imagine it restless, undisciplined, ready to challenge even the smallest assertion with a sadistic goal in mind: making the speaker uncomfortable in front of everyone.

In practice, it is actually quite rare that someone questions the legitimacy of the speaker. But even with a sympathetic audience and a presentation that is optimized to capture attention, sometimes it might be necessary to compensate for short attention spans. If the presentation is a bit long, if it takes place at the end of a long morning, it is not uncommon for side conversations to start; or worse, early in the afternoon, while digesting lunch, it is almost inevitable that the audience will start yawning, and some will even fall asleep in their seats.

Public speaking meaning having power! If among those in attendance, there are two people who are gossiping or giggling, or napping, it is obviously destabilizing for the speaker. There are those who will think their legitimacy to speak has been questioned, because they don’t feel they’re up to the task and will try to act as if nothing has happened. There are those who will take it as an affront, because they feel that they’re not being shown respect and will get angry. And finally, there are those who will consider it normal because they are convinced that they are not worth the audience’s time, and its behavior will confirm what they already believe… You have certainly recognized the three forms of our response to stress: flight, fight and freeze. How can we respond while staying calm?

When we think about it, there are plenty of good reasons to justify why some talk or doze without it being a personal attack. It is important for you to believe that the audience is naturally considerate. And in most cases, you will develop a more relaxed posture that will allow you to better handle situations that arise, including the most sensitive.

What if there’s chatter? There are indeed many reasons why some people in the audience begin a conversation: because something may not be clear; because your remarks inspired an anecdote; because you created a real atmosphere of complicity, or simply because fatigue naturally dispersed attention.  If you don’t intervene, consideration or not, you may give the signal that it’s recess time and see conversations multiply. In addition, those who are speaking are already not listening to you anymore. Intervene systematically to ask if something isn’t clear or if you can help or if they want to share an anecdote. This is usually enough to refocus attention, and even sometimes, to share an original idea. The longer you wait, the more it will be destabilizing and require you to adopt a position of authority, which is rarely the right option.

What happens if someone falls asleep? This situation is much more unsettling. Watching someone dozing off in front of you makes you directly question the value of what you’re presenting, how you’re presenting it and more generally your posture as a leader.  Once the audience realizes that someone has fallen asleep, it usually triggers laughter and chatter that will accentuate the impression that you’re being made fun of, or that you’re losing control of the situation. Let’s put ourselves in the position of the person who dozed off: it has been a long day, maybe the previous night was short and suddenly, the eyelids are heavy, the head nods and even though he’s trying hard, it becomes impossible to resist sleep! Again, you must intervene, for the person’s comfort as well as your own. Wake him up, protecting him from possible laughter from others, offer him a break or to go get some fresh air for five minutes. Often enough, this simple interaction will suffice to get him out of his drowsiness and allow you to resume while maintaining the posture of a considerate and compassionate leader.

Leadership
← The secret to last!And what if trivial were indispensable? →