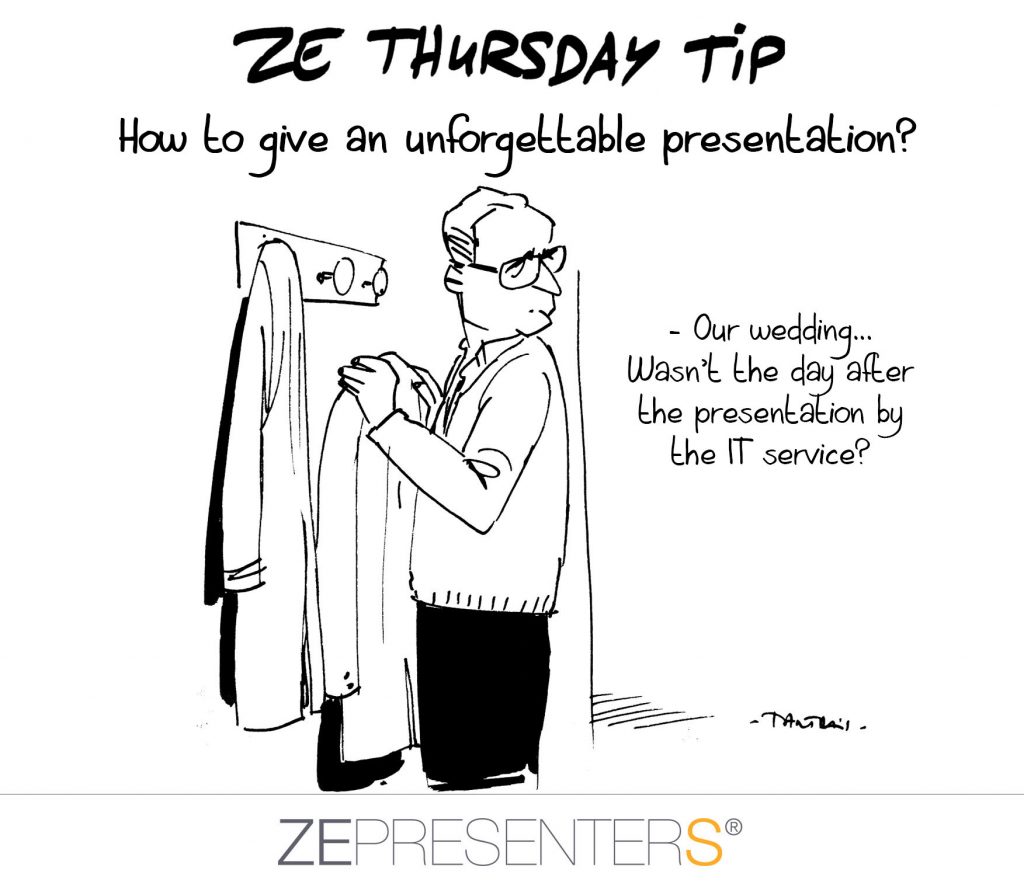 The most effective way to firmly anchor a speech into the minds of your audience is to make them feel an emotion. Indeed, emotions allow you to quickly access your memory. When someone reminds you of a moment in the past, you will first call upon the emotions you felt: « it felt good », « I was bored », « it was ugly », « it was beautiful »… only then, will you be able to access the details. This feeling will also influence the way you grasp the same situation in the future: « it was good and I want it » or « it was bad and I don’t want it ».

The method to prepare what will anchor your speech has been regularly theorized. Nancy Duarte talks of the S.T.A.R. moment (Something They’ll Always Remember). The goal is always to provoke a reaction from the audience – fear, humor, disgust, surprise- and to use it to leave a strong memory of your idea. Here are four proven methods:

Show instead of explaining – It is essential to be as concrete as possible. During the launching of the mobile service provider ‘Free’, when Xavier Niel announced that he would offer each participant a flat rate of 2 euros, they didn’t find a SIM card under their seat, they found a 2 euro coin… it was concrete, « 2 euros equals 1 contract ». When Jamie Oliver criticizes the amount of sugar there is in baby milk in England, he arrives with a wheelbarrow full of sugar that he empties before him and says: « this is what each of our children eat in 1 year! »

Raise awareness – It is not always easy to emotionally engage an audience faced with a risk. And we have known, since the ads on road safety, that too much emotion can be counter-productive. When Bill Gates wants to raise awareness at a fundraising event for rich Americans to the dangers of malaria, he shows them a jar containing a mosquito, which he releases into the room… none of the participants can forget what they experienced at that moment.

Use self-Deprecation – Especially effective in anchoring an element of credibility, self-deprecation shows that you know how to play with the image that you send to others. When Obama wanted to diffuse the controversy started by Donald Trump concerning the validity of his birth certificate, he announced during a full formal dinner that he would make the first video of his birth public and projected the first minutes of The Lion King!

Create an expectation – If your goal is to build a strong rapport with your audience over time, it would be interesting to think of a recurring gimmick that would be reproduced at each of your speeches. This way you will create an expectation in your audience that will increase their attention. Steve Jobs initiated this type of rendez-vous by stating that he’d finished his presentation, then adding: « One more thing… »

Storydesign Storytelling
← How to conclude a presentation?What’s the use of slides? →